It started out innocently enough – the Tamed Cynic posted a meme with a quote from someone named Robert Farrar Capon: “God’s grace in Jesus Christ isn’t cheap. It’s not even expensive. It’s free.” I thought it was good and witty, but forgot about it with my continued scrolling through the strange wonders of the interwebs. 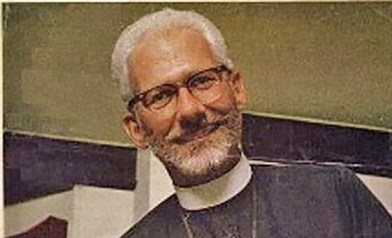 But then I came across his name again, this time being quoted by my friend Joshua Retterer for an episode of Strangely Warmed. I was content to leave Capon among the great list of “Theologians I Know But Don’t Read” but Josh had the nerve to send me not just one of Capon’s book in the mail, but three.

And when I reluctantly opened to the introduction to “The Romance of the Word” I couldn’t put it down.

Fast-forward through the last six months and I’ve read nearly everything Capon published and it has completely ruined my ministry. His absolute insistence on the unwavering commitment to God’s unending and irrevocable grace has sunk deep into the marrow of my belief and I can’t kick it. Try as I might to end my sermons now with a “how to put this belief into practice moment” I can’t get out of my mind Capon’s fundamental claim that “good preachers ought to be like bad kids. They ought to be naughty enough to tiptoe up on dozing congregations, steal all their bottles of religion and morality pills, and flush them down the toilet.” Why? Because God’s grace is bigger than all of our preachments, and is never contingent on our ability to do much of anything. In fact, it is precisely our inability to do much of anything that makes grace necessary in the first place.

And so my preaching has changed, and it has ruined my ministry. It is ruined because all of the cheap moves I made to get people more involved (or worse: feeling guilty about lack of involvement), can no longer stand up to the unwavering claim of the cross.

I’ve been navigating these new waters for the last few months, and I thought I owed it to Jason and Josh to both thank them and castigate them for introducing me to Robert Farrar Capon. And I decided to record the conversation for an episode of the Crackers and Grape Juice podcast. If you would like to listen to the episode you can do so here: Grace Is For Losers

And, if you don’t want to listen to the three of us talk about Capon, you can just listen to the first part of the episode and hear the man himself preaching at Duke Chapel in 1988.