In the fifteenth year of the reign of Emperor Tiberius, when Pontius Pilate was governor of Judea, and Herod was ruler of Galilee, and his brother Philip ruler of the region of Ituraea and Trachonitis, and Lysanias ruler of Abilene, during the high priesthood of Annas and Caiaphas, the word of God came to John son of Zechariah in the wilderness. He went into all the region around the Jordan, proclaiming a baptism of repentance for the forgiveness of sins, as it is written in the book of the words of the prophet Isaiah, “The voice of one crying out in the wilderness: ‘Prepare the way of the Lord, make his paths straight. Every valley shall be filled, and every mountain and hill shall be made low, and the crooked shall be made straight, and the rough ways made smooth; and all flesh shall see the salvation of God.”

“Repent of your sins and your debauchery!”

“Repent, for the end is near!”

The words echoed across the campus.

He stood on a makeshift soapbox clothed in a suit and tie and was yelling through a megaphone. And yet, it seemed as with every increase in decibels, less and less people paid him any attention. His “crowds” were college students after all, and the last things any of us wanted to hear about at the time were our sins and whatever it meant to repent of them.

Day after day he would stand from his perch in the exact same place spouting off the same words of fear, and challenge, and torment. And I never once saw anyone stop to talk to him.

But we talked about him all the time – whether we were in the dining hall, hanging out in the library, or even in our classes, the “prophet” (as we called him) was a regular topic of conversation: Who was he? Where did he come from? What did he really believe?

And, like most college students, we spent way more time wondering about the prophet than we did about our classes.

Our best guess was that he was from one of the local baptist and/or evangelical churches, that he might’ve even been the pastor, and that he foolishly believed that by yelling at college students some of them would show up at his church on Sunday mornings.

The weeks and the months went by, and he remained steadfast in his mission. In fact, he became such a permanent marker in the landscape that on the few rare occasions that he wasn’t in his usual spot I actually got worried something had happened to him. But then the next day, he’d be back.

This went on like clockwork until Advent. I went to church on Sunday morning like I always did, hanging out in the back as the one and only token college student, and someone from the church went up to read the words from the gospel according to St. Luke: “The word of God came to John son of Zechariah in the wilderness. He went into all the region around the Jordan, proclaiming a baptism of repentance for the forgiveness of sins, as it is written in the book of the words of the prophet Isaiah, “The voice of one crying out in the wilderness: ‘Prepare the way of the Lord.”

And I stopped listening to everything else. Because, for the first time, I saw the prophet on campus in a different light. Instead of assuming he was off his rocker or, at the very least, deeply flawed in his sense of evangelism, I began to see connections between the prophet, and John the Baptist.

I couldn’t stop thinking about it.

And then, the following week, I found myself walking over to him on campus while everyone was walking the other direction, and I didn’t even know what I was going to say.

The season of Advent is all about being in the in-between; in between things the way they are and the way they ought to be. We often experience it as this time set apart that is dedicated to preparations – At home we are cleaning, and decorating, and cooking. We find the perfect Christmas tree and then stress out when all of the old lights fail to work. We pull out the box of ornaments and struggle to keep back the tears as we hold up the popsicle stick reindeer that someone made years ago.

And in the midst of our busyness and preparations, in walks the crazy prophet John the Baptist proclaiming a very different kind of preparation.

The people believed that all of the power was held in Jerusalem – John found it in the wilderness.

The people believed that God was on their side no matter what – John knew that everyone needed to repent.

The people believed in presenting the best version of yourself in front of others – John wore camel’s hair and ate wild locusts.

A new word came to John in the wilderness – the time had come to prepare for a new way, one in which every mountain would be dropped low and every valley would be lifted up.

He was bold and crazy with his words and actions: Take a good and hard look at yourselves! Repent of your transgressions if you want to be ready to receive the one who is coming!

Repentance is not something we think about during this time we call Advent. People outside the church are spending this time stringing up lines of popcorn in their living room trees, they are humming along to Bing Crosby while waiting in elevators, and they are sipping on eggnog at night.

But here, in the church, we are listening to a very different kind of tune – the challenging words of a radical prophet who calls those with ears to hear toward a ministry of repentance.

Repentance – its’ one of those words we either avoid or we throw around without really knowing what it means. Repentance, metanoia, literally means to change one’s mind, to turn around, to be reoriented.

And, as John says, it is in the metanoia that all flesh shall see the salvation of God.

The people who scream out about the kingdom of God from the street corners of life make us very uncomfortable. We see the cardboard signs, or we see the oblong megaphone, and we start asking ourselves all sorts of questions.

They make us uncomfortable because they are pointing at a reality that we often talk about in church, but they do so in a way that confronts us and interrupts us, whereas we usually show up here already knowing what to expect.

John the Baptist makes us uncomfortable. He joins the story of expectancy at the beginning of the gospel and knows something about living in the in between. He, more than most, understands the need to truly consider the condition of our souls, of our world. He witnesses to the difficult work of looking at our wrongdoings, our regrets, the damage we’ve cause, what we’ve said and done, and what we’ve left unsaid and undone.

John’s words and ministry upset the status quo of our complacency. The kingdom earthquake is shaking all the old expectations of what we should say and what we should do. The fault lines of change are running through the middle of history and God is announcing a new order that carries with it a whole new way of seeing the world.

John calls out to the crowds and to us through the sands of time: “Prepare the way of the Lord, make his paths straight. Every valley shall be filled, and every mountain and hill shall be made low, and the crooked shall be made straight, and the rough ways made smooth; and all flesh shall see the salvation of God.”

These are rather uncomfortable words for us to consider during the season in which we most yearn to be comforted.

I walked across the quad with a focus that I should’ve reserved for my classes, and when we were close enough to see each other’s eyes the campus prophet froze in the middle of his oration. I realized, in that moment, that I was perhaps the first person to ever approach him in the middle of his pontificating and so we both stood there in silence while starring at each other.

I finally blurted out in a way that must’ve sounded as crazy as his message: “Why are you doing this?”

He slowly lowered the megaphone and calmly replied, “We’re stuck with each other in this crazy world, and I’m just trying to save everyone.” 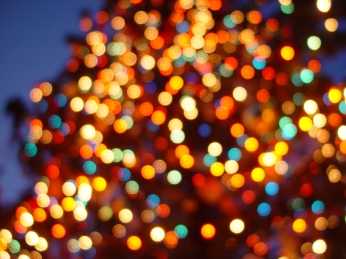 Our repentance, our metanoia, our turning around will likely involve us taking a hard look at our own lives and the structures/systems/people of the world in new and different ways. Repentance compels us to evaluate how we are living and whether or not we are helping to build the kingdom.

In a world and in a time where all we want it grace, we forget that we need the grace because we are sinners. Whether we actively make the wrong choice (or make no choice and therefore sin by omission) or we tacitly participate in the powers and principalities around us which profit off of the marginalized, we are all sinners in need of God’s grace.

And Advent is the wonderfully strange time in which we pause, we reflect, and then we prepare to follow the One born in the manger, hung in a tree, freed from the grace, and the One for whom we are waiting.

Repent! Turn! The prophet from the wilderness of Judea and from my college campus is screaming for those with ears to hear.

But what does our turning accomplish? Can we hear that challenging word and respond with a repentance and walk in the light to the end of our days?

The end of all our preparing and all of our repentance for Jesus Christ inevitably leads to strange and frightening realizations:

We cannot save ourselves.

We cannot save anyone else.

And we can never really prepare the way for Jesus. It is only God in Christ who can actually make the way ready for the arrival.

Jesus’ entering into the world is not contingent on our worthiness or our repentance. Though that certainly doesn’t mean we shouldn’t repent. It is just a recognition that what we celebrate at Christmas, what we yearn for in the future, is not something that we can accomplish.

It is the power of God for salvation; we only get to witness it.

We are sinners, stuck in our sin, and even if we are strong enough to turn and repent, we eventually turn back to our own way again.

And yet we are called to metanoia, John and the campus prophet plead with us to do so. Not because it earns us anything, not because it is the prerequisite for Christmas, but simply because it is a behavior that is normative in the world inaugurated in Jesus Christ.

Repentance is simply something we do in the journey we call discipleship.

Ultimately, John is the least likely person to call us to turn. He is like the campus prophet screaming into the ether day after day. John is the type of person most of us ignore today.

We never really know from where the Word of the Lord will come, but it always does.

It might even come from a place we would never expect – like a worship service, like the middle of a college campus, or even a manger. Amen. 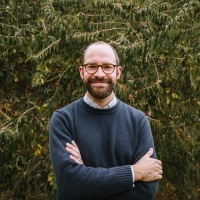