O that you would tear open the heavens and come down, so that the mountains would quake at your presence – as when fire kindles brushwood and the fire causes water to boil – to make your name known to your adversaries, so that the nations might tremble at your presence! When you did awesome deeds that we did not expect, you came down, the mountains quaked at your presence. From ages past no one has heard, no ear has perceived, no eye has seen any God besides you, who works for those who wait for him. You meet those who gladly do right, those who remember you in your ways. But you were angry, and we sinned; because you hid yourself we transgressed. We have all become like one who is unclean, and all our righteous deeds are like a filthy cloth. We all fade like a leaf, and our iniquities, like the wind, take us away. These is no one who calls on your name, or attempters to take hold of you; for you have hidden your face from us, and have delivered us into the hand of our iniquity. Yet, O Lord, you are our Father; we are the clay, and you are our potter; we are all the work of your hand. Do not be exceedingly angry, O Lord, and do not remember iniquity forever. Now consider, we are all your people.

Advent begins in the dark. And, of course, it’s hard for us to wrap our minds around this strange beginning, not only to a season, but also to a new year in the life of the church. After all, our sanctuary has changed. Gone are the white sheets of Christ the King Sunday, tucked away are the green banners from Ordinary Time. Today is a new day in the life of the church and in each of our lives. Today is a day of purple and blue, of royalty and repentance; today we begin in the dark.

For many churches in many places, Advent is filled with joy and hope. Pastors sprinkle their sermons with tidings of good cheer, and wishes of merry Christmases. The sentiment of the season is one of smiles, laughter, and bright light.

But Isaiah speaks a different word.

From ages past, no one has heard, no ear has perceived, no eye has seen any God besides you, who works for those who wait for him. You meet those who gladly do right, those who remember you in your ways. But you were angry, and we sinned; because you hid yourself we transgressed. We have all become like one who is unclean, and all our righteous deeds are like a filthy cloth. 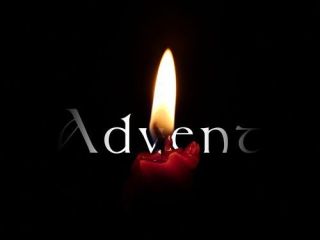 From the dark place of reflection, we read Isaiah’s words about God tearing open the heavens and shaking the foundations of the earth, but when we try to imagine it in our minds we don’t think of the new heaven and the new earth of revelation. Instead, we have visions of devastating destruction like floods, earthquakes, and perhaps even nuclear war.

During Advent we might want our God to look and act more like the chubby man who slides down the chimney with gifts, but Isaiah presents us with an image of God as angry and silent.

And that is the tension of this season. The words from the prophet are even harder to swallow for those of us who have already put up the tree, who have hung all the lights, who have turned our radio stations to the never-ending array of Christmas tunes. But Advent has always held the tension of God’s judgment with God’s promise.

We have all become like one who is unclean; all our righteous deeds are like a filthy cloth. We have sinned, and God has moved away from us.

Last week, in our Sunday School class, we wrestled with the always difficult subject of forgiveness. We talked about actions that feel unforgiveable and how difficult it is for us to wrap our heads around the fact that God’s love is for all people, no matter what. And in the midst of the discussion, someone from our church mentioned that beyond individual forgiveness, it might be even harder to forgive entire groups of people for terrible atrocities. He probed us to think about Germany and Japan, to ponder the devastation waded against nation by nation. How can we forgive those kinds of things?

A couple weeks ago I heard a story on the radio that has haunted me ever since. As a teenager in 1955, Paul Zimmer was assigned by the military to serve at Camp Desert Rock, Nevada. He was there to witness the testing of atomic bombs. He thought it might be a cool assignment, or at the very least, it would produce stories that might be a good way to pick up girls in the future. He spent a lot of time smoking cigarettes and chumming it up with the other young men, but every couple days he and the others would be convoyed in the middle of the night and marched into the desert.

There they would find long thin trenches dug into the earth like scars from a giant. They wore steel helmets, with little else, and they would wait.

And now I’ll use his words: “I never became fearful until I heard the countdown over the loud speaker. And I only became terrified when I saw the flash. It was bright enough, that even with my eyes closed, I could still see the bones in my hands over my eyes. The shockwave crashed over the trenches and we were then told to open our eyes and watch. We saw the mushroom cloud, with strange purples and blues billowing into the sky above.”

“I saw 8 atomic blasts in total, each of different sizes and deployments. Sometimes the shockwave was so powerful that the walls of the trench would cave in and we struggled to climb out of the grave dug into the earth. And, again and again, we were given the all clear and marched forward into the blast area to wear witness. Bearing witness seemed to be the entire reason we were there.”

“One bomb was three times the size of the one we dropped on Hiroshima, and when we walked forward the air was filled with the stench of ozone, small bushes and trees had evaporated into thin air, and small animals were scattered on the edge of the blast radius whimpering in pain. We walked forward and we passed crumpled vehicles and turrets, mannequins with melted faces, and mangled test animals. No one ever asked us to write a report, nor did anyone ever ask what we saw, because (it turns out) they were watching us. They wanted to see how young men responded to an atomic blast.” 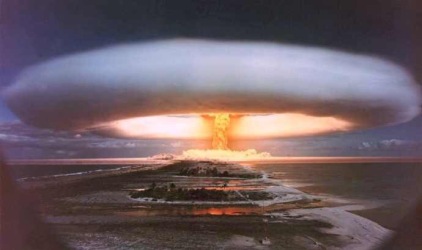 “Over the years I’ve begun to realize that I am one of the last living people in America to have actually experienced close-up explosions of atomic bombs. And now, in my late years, when I think about my experience, I feel it is my responsibility to witness to the sights and the sounds that still ring in my head even today. I feel it is my duty to remember the reckless absurdity of it all, the being buried alive, the walking past death and decay, and the waking up to do it all over again.”

We live in a world still shrinking under the threat of nuclear war. Tweets and temptations to push the button ring out across the globe. And while we want our Advent season to be nice and pretty and light, there is a real risk to maintaining the lives that we have grown so comfortable with.

Zimmer ended his story by saying this: “We keep threatening to release these bombs, and I suspect that one day we will. Most of us have forgotten what we are capable of, but I have not.”

Advent jolts us out of Ordinary time, where we’ve gone all over the map (so to speak). Isaiah speaks to us on this day with invasive news that it’s time to repent, and to think about fresh possibilities. That’s a tough thing to swallow these days, particularly when we are more moved by feeling good than by being good.

If we’re honest with ourselves, we don’t want to hear about nuclear explosions at this, the most wonderful time of the year. We want something pretty and something happy. But I think Paul Zimmer’s witness is as prophetic as Isaiah’s. The hope of Christmas has not looked away from the darkness but straight into it. That, after all, is the message of the incarnation. God comes to us in flesh, in the brokenness of the world, to redeem the world.

But we’re not there yet.

As Christians, though we move through the liturgical calendar every year, we are stuck in Advent. We live in the darkness of Advent, between the first arrival of God’s Son in Bethlehem and the final arrival of God’s Son in the New Heaven and the New Earth. We’re stuck in the tension between the ways things are and the way they ought to be, until Christ comes in final victory and we feast at his heavenly banquet.

But there is hope in this strange Advent time and it comes from an unexpected place. If we put our trust in princes, or politicians, or even plutonium, we will be disappointed. We cannot receive lasting comfort from this broken world of ours where it feels like the end is always a buttonbush away. Our hope and comfort must come from another place, a place beyond our ability to grasp and comprehend, a place of ultimate divine humiliation and divine exultation, a place that is both beginning and end, a place that isn’t even a place: God.

The good news we anticipate on Christmas will come, it will be brighter than any atomic blast and it will fundamentally change everything about the world. God will come again and tear open the heavens. God will reorient the world in such a way that the first shall be last and the last shall be first. God’s justice will rain down like waters. God will wipe away every tear from our eyes. God will destroy evil forever.

As Christians, yes, we sit in the shadow of the cross and in the darkness of Advent. But we also know the end of the story, we know that greater things are still to come. We know that only God can shake the foundations of the earth. We know that hope in God is unlike anything else in existence. We know all of this because we know that the promise in Mary’s womb comes to fruition in the empty tomb. Amen.