On one occasion when Jesus was going to the house of a leader of the Pharisees to eat a meal on the Sabbath, they were watching him closely. When he noticed how the guests chose the places of honor, he told them a parable. “When you are invited by someone to a wedding banquet, do not sit down at the place of honor, in case someone more distinguished than you has been invited by your host; and the host who invited both of you may come and say to you, ‘Give this person your place,’ and then in disgrace you would start to take the lowest place. But when you are invited, go and sit down at the lowest place, so that when your host comes, he may say to you, ‘Friend, move up higher’; then you will be honored in the presence of all who sit at the table with you. For all who exalt themselves will be humbled and those who humble themselves will be exalted.” He said also to the one who had invited him, “When you give a luncheon or a dinner, do not invite your friend or your brothers or your relatives or rich neighbors, in case they invite you in return, and you would be repaid. But when you give a banquet, invite the poor, the crippled, the lame, and the blind. And you will be blessed, because they cannot repay you, for you will be repaid at the resurrection of the righteous.

Throughout the gospels, people are forever asking Jesus about the kingdom of heaven. What does it take to get in? Who will be there? When will it happen?

And whenever Jesus is asked about the kingdom of heaven, do you know what he compares it to most often? A wedding feast.

I love weddings. I love getting to spend time with a couple as their special day gets closer and closer. I love working with families in terms of making the wedding ceremony as special and faithful as possible. I love being invited into this profoundly holy moment at the altar of marriage and bringing two people into an everlasting covenant. But more than all of that, I love weddings because they are as close as we can get to heaven on earth.

During the months leading up to a wedding, while I’m working on pre-marital counseling and the homily and the order of worship, the couple has a lot of work to do as well. They have to procure a reception location, taste test the hors d’oeuvres and the main course, and find the perfect DJ. But perhaps the most difficult and taxing requirements prior to the wedding are the guest list and the seating arrangements.

Nearly every couple I have married has struggled with who to invite and where to seat them. Does that uncle that no one has seen in years warrant an invitation? And what about your cousin’s ex-wife? Maybe we should just send her an invitation to be kind, but if she shows up where can we put her? And where in the world are we going to put the pastor and his wife?

At one wedding, I rushed through the rehearsal under the blistering sun and everyone was remarkably thankful when I stopped talking. Because the wedding was out of town, we were invited to the rehearsal dinner and upon arrival we did not know where to sit. There was clearly an area for the bridal party, so we avoided that table and decided to just sit at a table in the middle of the room. Like an awkward moment in a middle school cafeteria, we waited to see who would sit next to us, but as family members and friends entered the room, the father of the groom stood up to make a speech. He welcomed everyone and thanked the room for supporting his son and soon to be daughter-in-law, and then he pointed over at me. He said, “Now everyone, this is my pastor and the woman sitting next to him is his wife. So all you young men, you need to stay away from her tonight. Because Taylor has the power to send you to heaven, or to hell.” The room erupted in laughter at the joke, and it was pretty funny, but no one, and I mean no one, sat next to us for a long time.

Jesus was once invited to the house of a leader of the Pharisees and was being watched closely. When he arrived he noticed how particular people chose to sit in places of honor and he used the moment to teach about the kingdom of God. “When you get an invitation to a wedding, do not sit in the places of respect and honor. Someone might come up to you who is more distinguished and important and they will take your place. You will then have to disgracefully move to the reject table. Instead go and sit at the reject table from the beginning, so that when the host comes by he may call you to a grander table. For all who exalt themselves will be humbled and those who humble themselves will be exalted.”

There is always a strange moment at wedding receptions when all the guests stand in line at a poster or some other Pinterestly designed labeling system for where each of us will be sitting. At another wedding, after preaching and leading the ceremony, we got in line with everyone else to find our names and our corresponding table. As my eyes went down the list, I knew that we literally knew no one at the wedding (except the bride and groom) and I wasn’t hoping for anything special. But when my eyes finally made it to the end of the list, I knew that we were definitely assigned to the reject table.

You know the one, the table where you send the odds and ends, that strange second cousin that you had to invite and you hope he doesn’t get too rowdy, the piano teacher from a decade ago, the weird friend your mother insisted on inviting but who always drove you utterly crazy. That table.

When we made our way to the back of the room, it only took one glance to confirm our suspicions that we were at the reject table because no one was talking and none of the people knew each other. At every other table in the reception area conversations were flowing and laughter was breaking out, but at the reject table it was silent.

In the silence you could almost sense the recognition of our reject status, but the nail on the coffin was when the pastor and his wife pulled out their chairs and sat down. At a wedding, if I sit at your table, you are part of the rejects.

At first we just further perpetuated the silence by sitting there awkwardly fumbling with our cell phones and such, until I decided to break the ice and compliment the camouflage koozie that was keeping a beer cold in the hand of who I can only imagine was a distant cousin. I said something stupid like, “Man, I could barely tell you were even drinking a beer.” At first he didn’t respond, either because the joke wasn’t funny, or because he was unsure of how to speak to a pastor about beer. But when Lindsey laughed at my foolish attempt to be funny, the whole table seemed to take a collective breath and relax.

From the humility of the reject table we were exalted to the joy of the wedding celebration.

Jesus spoke to the people gathered together to teach them about the virtues of humility. And in telling the parable of the wedding banquet he was not just assigning them to be humble at weddings, but in all aspects of life. To live the kind of selfish and exalted life of the best table is to forget that we depend on God. It is to believe that we are in control of our lives and that we have the power to save ourselves. It is a fundamental lack of trust that the Lord will provide. 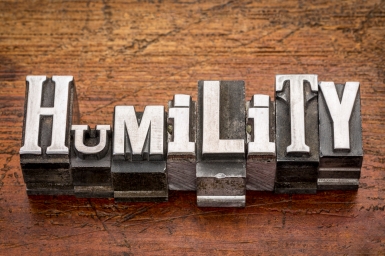 Humility, on the other hand, is an unselfish way of living while depending on the Lord. It is to believe that our lives are not our own and that only God has the power to save us. It is a fundamental trust in the Lord’s ability to provide.

And Jesus does not leave it at that. He pushes the gathered body even further. Whenever you’re invited somewhere, live humbly. And whenever you are the host, do not invite people with the expectation that they will provide the same courtesy. Do not invite your family, and your neighbors, or your rich friends assuming they will do the same. Instead, invite the poor, the crippled, the lame, and the blind. Invite the people you would otherwise ignore. And you will be blessed precisely because they cannot repay you.

This is a tough commandment for all soon to be married couples. Most of them would never dream of omitting an invitation to family members, and friends, and rich relatives who give the best wedding gifts. They would never dream of inviting strangers and outcasts and rejects to their wedding feast and celebration.

But the marriage of Christ with Christ’s church is a wedding celebration that all of us have been invited to. We are here in the midst of worship: the wedding of God with God’s people, and none of us should have been invited. We can never repay the kindness of God’s invitation, we are unworthy of sitting in these pews, we fail to be obedient to the kind of love that we experience here. And yet we are invited. And frankly, we are all sitting at the reject table.

Jesus Christ invites us to this place to celebrate the great victory over death, the resurrection of glory, and the reconciliation of all things. And that’s different than just being included. Many churches love to claim and proclaim their inclusiveness. Inclusive has become such a buzzword in Christianity that you will find it on nearly every church website and every church bulletin you come across. We so desperately want to appear welcoming and inclusive with the hope that it will draw people into our wedding celebration called the church.

Jesus did not lead an inclusive ministry.

What Jesus led was a ministry of invitation.

Much like being invited to a modern wedding celebration, Jesus actively went out seeking others to draw them into the party. He met them where they were and invited them to join him on the way that leads to life. His ministry was about breaking down the labels and constructs that people were isolated into, and gathering all of the so called rejects together to celebrate the glory of God.

Our Lord invites all without expectation and without assumption. God Almighty knows our sin and our failures and still sees potential. The Lord meets us where we are through the words of our worship and through our friendships. The great story of scripture, from this passage in Luke to the entire narrative, is not about God waiting for us to show up, but God’s great work to find and transform us.

Sitting at the reject table comes at a cost. It means being surrounded by people we do not know, people we probably don’t agree with, and people who might drive us crazy. It requires a tremendous amount of humility and trust and faith. But it’s also the way we got invited to this party. Amen.