Then Jesus, filled with the power of the Spirit, returned to Galilee, and a report about him spread through all the surrounding country. He began to teach in their synagogues and was praised by everyone. When he came to Nazareth, where he had been brought up, he went to the synagogue on the Sabbath day, as was his custom. He stood up to read, and the scroll of the prophet Isaiah was given to him. He unrolled the scroll and found the place where it was written: “The Spirit of the Lord is upon me, because he has anointed me to bring good news to the poor. He has sent me to proclaim release to the captives and recovery of sight to the blind, to let the oppressed go free, to proclaim the year of the Lord’s favor.” And he rolled up the scroll, gave it back to the attendant, and sat down. The eyes of all in the synagogue were fixed on him. Then he began to say to them, “Today the scripture has been fulfilled in your hearing.” 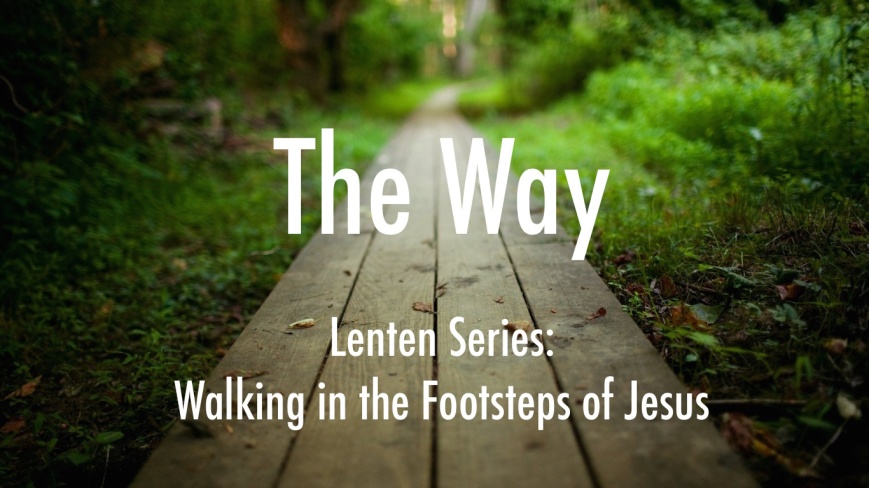 This morning we continue in the season of Lent. Christians throughout the world will use this time to repent of sins and seek renewal in their commitment to follow Jesus Christ. We are exploring and examining Jesus’ life from baptism to resurrection by walking in his footsteps on the way that leads to life. We are using Adam Hamilton’s book The Way to guide our weekly services because it follows Jesus’ life in a way that is important for us to rediscover during Lent. Today we are looking at Jesus’ healing ministry.

Jesus, after his baptism by John and his temptations in the wilderness, was filled with the power of the Spirit when he returned to Galilee. He began teaching in synagogues and people were praising him left and right.

When he came home to Nazareth, the place where he grew up, a town of no more than 200 people, he went to the synagogue on the Sabbath, as was his custom. The place was filled to the brim with people who had known him his entire life, filled with friends who were more like family, filled with people full of expectation.

He stood up to read, and the scroll of Isaiah was handed to him. He unrolled the scroll and started to read, “The Spirit of the Lord is upon me, because he has anointed me to bring good news to the poor. He has sent me to proclaim release to the captives and recovery of sight to the blind, to let the oppressed go free, to proclaim the year of the Lord’s favor.”

Jesus then slowly rolled the scroll back up, and sat down to begin his lesson. Everyone was glued to Jesus. They sat around him and waited to hear what he had to say. When he opened his mouth, he said these words, “Today the scripture has been fulfilled in your hearing.”

The people could not believe their ears. Who in the world does this son of a carpenter think he is? The Messiah? They began to murmur among themselves regarding his audacity and some even wondered if he would perform miracles like they ones that were rumored.

When the people in the synagogue heard his words, they were filled with rage. They got up, drove him out of the town, and led him to the brow of the hill so that they might hurl him off the cliff. But he passed through the midst of them and went on his way.

Jesus spent the majority of his ministry looking for the sick and the oppressed. Rather than showing up at the palaces of the wealthy and powerful, Jesus looked for the people living on the margins of life and made them whole.

Healing, at least the kind of healing Jesus did, was not limited to physical health. He cleansed the sick, and brought sight back to the blind, and helped the lame to walk, but he also did so much more.

He proclaimed that he came to bring good news to the poor. He did not give them money to reverse their socio-economic situations. Instead he pointed out how, in the kingdom of God, the last would be first and the first would be last. He gave meaning to their lives by giving them the time and attention they deserved.

He proclaimed that he came to bring release to the captives. He did not go around encouraging insurrections against prison guards and corrupt politicians. Instead he reunited broken families, forgave wrongdoers, and encouraged the downtrodden; all that were held captive by the power of sin.

He proclaimed that he came to recover the sight of the blind. He did not go around healing individual’s eyes and leave them to their own devices. He healed them and sent them back to the families that had disowned them, to the friends that had abandoned them, and to the towns that had forgotten them.

Jesus’ ministry of healing went beyond biology and into the realm of relationships. He brought newness to people’s lives and then expected the culture to change at the same time. Jesus came to heal the sick of body, and of spirit, all at the same time.

And while Jesus loved healing others, he also loved disrupting contentment. He showed up in his hometown, proclaimed an incredible and powerful message, and then basically told the people that they needed something more than cheap grace. The kinds of people who really needed Jesus’ physical healing were not in the synagogue that day. They were the ones forced out of town, abandoned by friends, and disowned by families. By withholding his physical healing ministry from their gathering, he implicitly told them to start healing their brokenness first.

Let me tell you, Jesus is a tough pill to swallow. You think the message in the synagogue that day was bad? Wait till you hear some of the other things Jesus told his followers.

Full disclosure: What I am about to say are not my own words. If, while you’re listening, you start noticing that your fists are clenched, and you start wondering about where the closest cliff might be to throw me off, just remember that these are Jesus’ words and not my own.

“Do not store up for yourselves treasures on earth, where moth and rust consume and where thieves break in and steal.” (Matthew 6.19)

“You have heard that it was said an eye for and eye and a tooth for a tooth. But I say to you, do not resist an evildoer. But if anyone strikes you on the right cheek, turn the other also; and if anyone want to sue you and take your coat, give your cloak as well; and if anyone forces you to go one mile, go also the second mile. Give to anyone who begs from you, and do not refuse anyone who wants to borrow from you.” (Matthew 5.38)

“You have heard that it was said, ‘You shall love your neighbor and hate you enemies.’ But I say to you, Love your enemies and pray for those who persecute you.” (Matthew 5.43-44)

Jesus loved disrupting people’s false contentment. He came to comfort the afflicted, and afflict the comfortable. Even today, Jesus loves gathering people in a place like this and then turning our heads around to the people we are supposed to be healing.

What we often fail to realize is that God uses people like us to accomplish his will on earth. We are the instruments of God’s peace to deliver healing to the people around us.

Healing for others and ourselves can only come when we are willing to get uncomfortable in church and start living like Jesus outside the church.

When we catch ourselves mocking the people begging for money on the streets, Jesus wants us to know that if we ignore them, we are ignoring him.

When we catch ourselves serving the master of money and losing sleep over how much we have in our bank accounts, Jesus wants us to know that we are supposed to be using our blessings to bless others.

When we catch ourselves cursing the people fleeing their countries out of fear, Jesus wants us to remember that he once had to abandon his home out of fear.