There is therefore now no condemnation for those who are in Christ Jesus.

Inclusion is all the rage in the church these days (and just about everywhere else). We have such a desire to appear appealing to as many people as possible, that we put out signs on the  church property promising our inclusiveness, we develop slogans for websites assuring visitors that they are already part of the church family, and we cultivate sermon series about how to be more tolerant of our neighbors.

But nothing is more inclusive than the Gospel of justification for the ungodly.

It insists (demands) a Church exists where there is not a single distinction between us.

Because not a one of us is righteous (Romans 3).

We’re all the ungodly for whom Christ died.

Depending on the kind of church you grew up in, or saw embodied on television, talk of sin varies. In some traditions, sin is wagged at the congregation week after week in order to (hopefully?) scare people into faith. In other traditions, talk of sin is avoided at all costs unless it has to do with who should be allowed to get married or who should be allowed to become a pastor.

And yet, when Paul wrote his letter to the burgeoning church in the first century, the only sins he mentions are the sins for which Christ has already died.

That is, all of them.

Robert Farrar Capon, taking a cue from Paul, drops this into the laps of we religious types: “Both heaven and hell are populated entirely and only by forgiven sinners. Hell is just a courtesy for those who insist they want no part of forgiveness.”

Thats a tough truth to handle for those of us addicted to right-ness and wrong-ness. For, the Gospel (according to Paul) reminds us that since Christ has been raised from the dead we, who are in Christ by baptism, are not in our sins. But, at the same time, sinners we shall remain!

At the very least, we can’t even get along on Facebook or Twitter! We’re constantly doom-scrolling through the posts and tweets that set us off and even if we have the power to not respond, in our heart of hearts we know what we wish we could say.

We’re all the ungodly for whom Christ died.

And that work, the work done to us, is not our own.

Our baptism, our being in Christ, is not our own pious achievement or the height of our own perfect morality. It is, what we call in the church, grace.

And here’s the bad news turned Good News – the Gospel according to Paul, no condemnation, means we’re forever stuck at the party called salvation, the Supper of the Lamb, with people who think that certain people shouldn’t be at the party!

Whether its a denomination in-fighting about who can get married or ordained, or a country going to fisticuffs over differing political ideologies, or communities wrestling with police brutality and racial injustice, or any other thing we can imagine – Christians are stuck with each other, whether we like it or not.

Jesus has bound us together forever in the waters of baptism that destroy whatever divisions we want to create between us. Jesus, like the Father with his arm around his eldest son peaking in on the prodigal cutting up the rug inside the party, desires for us to celebrate together with the people we can’t stand. Jesus, abandoned, beaten, and betrayed, looks out from the Cross into our sins even today and says, “Father, forgive them – they don’t know what they’re doing.”

The Gospel according to Paul, the verse upon which the epistle to the Romans is set on fire, is that we are all the sinners for whom Christ died.

Look, I’m not a big fan of the church insisting on its existence being predicated on making the world a better place. I happen to believe that the church already is the better place that God has made in the world. But whenever I read this verse from Paul, and all my inclusivity buttons get pushed, I can’t help but wonder how much better things would be if we acted as if we believed it.

There is therefore now no condemnation for those who are in Christ Jesus. 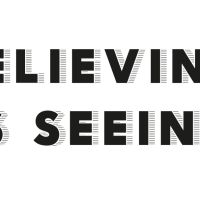