After the Sabbath, as the first day of the week was dawning, Mary Magdalene and the other Mary went to see the tomb. And suddenly there was a great earthquake; for an angel of the Lord, descending from heaven, came and rolled back the stone and sat on it. His appearance was like lightning, and his clothing white as snow. For fear of him the guards shook and became like dead men. But the angel said to the women, “Do not be afraid; I know that you are looking for Jesus who was crucified. He is not here; for he has been raised, as he said. Come, see the place where he lay. Then go quickly and tell his disciples, ‘He has been raised from the dead, and indeed he is going ahead of you to Galilee; there you will see him.’ This is my message for you.” So they left the tomb quickly with fear and great joy, and ran to tell his disciples. Suddenly Jesus met them and said, “Greetings!” And they came to him, took hold of his feet, and worshiped him. Then Jesus said to them, “Do not be afraid; go and tell my brothers to go to Galilee; there they will see me.”

It was dark but I felt invincible. I was seventeen years old, with a fresh driver’s license in my wallet, and we were driving to the church in the middle of the night on Easter Eve. My friend, Will, and I had come up with a plan on how to make this particular Easter one that no one would ever forget. We were young and dumb.

For as long as I could remember, the church always set up a tomb on the front lawn of the church during holy week. It was the size of a small shed and it stood out like an oppressive eye sore to remind everyone what Easter was really about. From Good Friday through Saturday, volunteers would stand guard by the tomb wearing Roman centurion costumes and would try to look stern while also waving at people that drove by. It was the church’s attempt to reexamine the greatest moment in the history of the world, but after years of seeing the same men stand by the same tomb, it had lost its impact.

On Easter Sunday, someone was always tasked with getting over to the church before anyone else to roll back the stone on the front of the tomb. That way, while people were scrambling to find parking spots before the service started, they could remember how the stone was rolled away when the women and first disciples discovered Jesus’ resurrection on the first Easter.

So we snuck out in the middle of the night, much to the later frustration of our parents, and we drove over to the church. Under the cover of darkness we rolled back the stone that covered the entrance to the tomb, and we carried it across the church lawn to the main sanctuary entrance. There is a slanted roof above the main doors that everyone can see, and we decided it was the perfect place for the stone. Of course, we hadn’t planned on how difficult it would be to lift the wood framed faux stone that was as tall as us on to the roof, so we had to back my car up under the gutters and toss the stone up onto the shingles.

It was perfect, and I can still remember how quickly we peeled out of the parking lot with proud looks on our faces. We were going to recapture the power of Easter for our church.

Much like Christmas Eve, I couldn’t sleep. I was so excited to see the faces of all the people in worship when they noticed the stone on the roof, I couldn’t wait to hear our pastor make a comment about God’s cosmic power to roll back stones, even onto the church roof, during his sermon, but mostly I was excited to see people excited.

I arrived with my family in our perfectly coordinated outfits with a lot of expectation. I could not keep back a permanent grin on my face the whole way to the church, and when we got to the parking lot I couldn’t believe what I saw.

Sure enough the stone was still on the roof of the entrance, it was in clear sight for everyone to see, but not a single person had noticed it. They were all walking in and talking like it was like every other Sunday.

Even worse, during the time before the service started, I moved around the sanctuary to eavesdrop on all the conversations and not a single person mentioned the miracle on the roof. I don’t remember a word for the sermon that year because I sat disappointed in my pew with my arms across my chest.

The joy of my expectation had been replaced with frustration at the lack of reaction from the congregation.

When the service ended, my family got in line with everyone else to shake the pastor’s hand. We slowly made our way forward until I lazily offered my hand and the pastor grabbed it and pulled me close.

He said, “I was praying in the sanctuary this morning, and I heard God speak to me.”

“Oh yes, and he told me to tell you that whoever put the stone on the roof better have it back down by tomorrow morning. Happy Easter!”

Have we become so content with Easter that it no longer shakes us? Are we so entitled that we have accepted the gift of eternal life without recognizing how transformative it is? Does Easter still shock us the way that it should?

The women got up early and made their way to the tomb. They were expecting it to contain Jesus’ dead body, they were still grieving over the death of their friend, but they knew what they had to do. And suddenly there was a great earthquake! An angel of the Lord descended from heaven and rolled back the stone and sat on it. His appearance was frightening and he scared the Roman guards to such a degree that they became like dead men.

But then the angel said to the women, “Do not be afraid! I know you’re looking for Jesus, but he has been raised! Go tell his disciples the good news.” So the women made haste with great fear and joy to share the gospel and suddenly Jesus met them on the road and said, “Greetings!” The women ran to Jesus and knelt to worship at his feet, but he said, “Don’t be afraid; go and tell my brothers to go to Galilee; there they will see me.”

This is shocking stuff. Jesus, dead on the cross, was placed in a grave, and three days later he rose. An angel appeared with an earthquake to roll back the stone at the tomb and proclaim God’s love through the resurrection of his Son. And at the end, the women respond in fear, joy, and worship.

This great gift of resurrection, the gift of Easter, shakes the very foundations of existence.

But does it still shake us?

We like Easter to be easy on the senses and on our consciences. Many of us like to dress up in our best clothes, and wear the right colors, and have an Easter egg hunt. Some of us are like the church of my youth who experienced Easter like any other holiday. Others are like the first disciples who were ready to get back to their lives after their Lord died, but then he showed up on Sunday and shook the world.

On Friday I came to church at about noon to take up our sanctuary cross and drag it through Staunton. This has been my holy week tradition since becoming a pastor and it always yields interesting results. The first year I carried the cross I was largely ignored; no one spoke to me or even acknowledged my presence. Last year was totally the opposite, people honked at me and waved their hands; I even had a few people yell curse words toward my direction.

This year however, I was met with reverence and ignorance. During the first hour or so I lost track of how many people rolled down their windows to shout “Amen!” or “God Bless!” When I walked up and down Beverley Street many people placed their hands into the posture of prayer, or bowed their heads, and even some people made the sign of the cross across their body. It was powerful for me to experience how much the cross was interrupting their lives. I witnessed God’s power made manifest in the cross on my shoulder as it met people and reminded them how far God was willing to go to transform the world.

But as I was getting ready to turn and start heading back, I saw a young family standing on a corner and I figured that I should keep walking. The husband and wife were cautiously sipping on their to-go coffees while their 8-year-old son was jumping to avoid cracks in the sidewalk. As I got closer they all started to notice the strange man carrying a cross on his shoulder, and they remained silent as I passed by.

I was only a few feet away when I heard the son exclaim: “Mom! That guy is carrying a giant ‘X’!”

While I continued up the hill I couldn’t help but laugh at the episode I had just experienced. But then my laughter turned to sorrow, for I realized that young boy had no idea what Christ did for him. He had no knowledge of Christ’s magnificent sacrifice on the cross to open up the gates of heaven. He had no understanding of the earth-quaking good news of Easter.

Every year Easter interrupts ous sensibilities and behaviors. On this day we feel the earth shake beneath out feet because God has conquered death. We are jostled to and fro by the empty tomb because it radically reshapes the way we live.

The resurrection is about power and grace. In it we see how God took something like the cross, a sign of death to the world, and made it into the means of celebration. On Easter, God transformed the tomb in the same way that he did on Christmas in a virgin’ womb; God made a way where they was no way. On Easter, God changed the world.

So come and taste the goodness of God in the bread and the cup. Listen for salvation in our songs and prayers. Witness the power of resurrection in the people in the pews next to you. Hear the Good News, the best news. Hear it and let is shake your lives. He lives! Hallelujah! 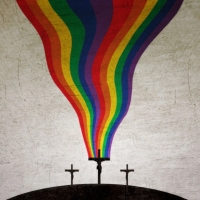 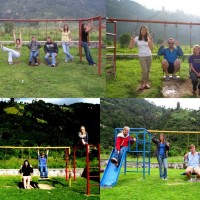